For more information, or to register, see this webpage:
http://www.companionbakeshop.com/guitarandsingin'.html 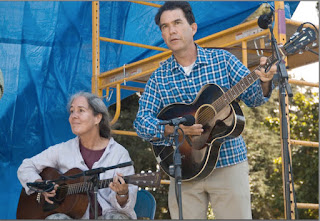 This class assumes a working knowledge of a few guitar chords of the students (so I am not dealing with absolute beginners). A minimum of six chords in basic first position is all that is required. It is aimed toward those who already know several chords and are looking to expand repertoire and accompaniment styles. If students can change chords without looking, that is a real advantage. Using songs as a platform for learning a variety of strums, rhythmic patterns, bass notes, and runs between chords will be a primary focus. Use of the flat pick, alternate chord voicings and key transposition will also be a dimension of the sessions.
Singing forms the heart of the class - not a trivial afterthought. Repertoire will include (of course) favorite American folk songs, old tried and true songs of migration, of love, of labor, of belief, of legend. Songs from Carter Family, Texas cowboys, southern brother duet teams, Mexican women singers,
New England poet/songsters, country blues song slingers, and early American country sources. Songs of the past. The notion of group music-making and singing in a fine, echo prone space as The Companion Bakery will add to the fun and musical experience for all.

Paul Rangell has been playing guitar and pursuing traditional music since a boy in the 1960s. He plays guitar in several bands, focussing on rhythmic accompaniment to fiddle music of many lands.  He also plays mandolin, violin, tenor banjo and guitarron in various configurations. Locally, you can hear him every Sunday morning at the Buttery Cafe with his family band, The Rhythm Rangellers, with The Percolators, with Adam Rose, and with Irene Herrmann in groups that specialize in selective instrumental repertoire. He is a regular at the Farmer's Markets and plays Italian and Mexican mandolin tunes every Tuesday night at La Posta (Seabright) with his wife, Emily Abbink. He loves old-time American songs, Brother Duets, early country, Western Swing, and classic Mexican songs. He has taught many summers at The Festival of American Fiddle Tunes (Port Townsend, WA) and Lark in the Morning (Mendocino, CA) as well as private lessons for several years on guitar, mandolin and fiddle.